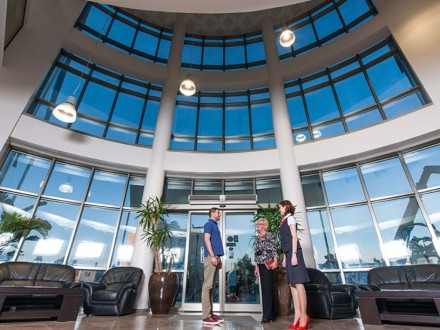 It has been long believed that there is no such a thing as ovarian cancer symptoms. However, in recent years doctors and patients agree that there are clear signs of ovarian cancer which should catch our attention, such as:

• More frequent urge to go to the toilet

As we see, symptoms of ovarian cancer may be confused with other medical conditions such as IBS (Irritable Bowel Syndrome). However, it is better to consult your gynaecologist or oncologist before ruling out the possibility of ovarian cancer. It is highly advised especially to women, who have a history of ovarian cancer running in the family.

Not Recommended For Ovarian Cancer Treatment

Most patients are able to undergo ovarian cancer treatment. Nevertheless, some medical conditions or general state of health of a patient may deem treatment of cancer impossible. Additionally, a late ovarian cancer diagnosis may mean that standard treatment is not possible or effective anymore. Especially patients with stage 4 ovarian cancer will be treated with palliative methods rather than operation or chemotherapy treatment.

Ovarian cancer is cancer which attacks ovaries. While it is most common among women after menopause, it can also affect younger patients. Ovarian cancer affects tens of thousands of patients every year but the development of ovarian cancer treatment methods leads to increase survival rate. Many women decide to have their treatment for ovarian cancer abroad, especially if they have to fund it on their own.

Preparation for ovarian cancer treatment starts with informing your oncologist about your medical history and giving a list of all medications you take. As for ovarian cancer surgery, it is important to stop smoking for some weeks before it. You will be given a list of breath and leg exercises which aim at preventing lung infection as well as forming of blood clots. Finally, you will be asked to fast for up to 6 hours before your surgery for ovarian cancer.

As for chemotherapy treatment, there is no fixed preparation. However, it is better to have all other medical procedures such as dental treatments done before starting chemotherapy.

• Ovarian cancer surgery – it aims at resection of as much of cancer cells as possible. Since cancer spreads outside of ovaries themselves, in general, a total abdominal hysterectomy with bilateral salpingo-oophorectomy is performed, which means removal of one’s womb, cervix, ovaries, and fallopian tubes. However, other types of hysterectomy may be taken into consideration.

Recovery from ovarian cancer surgery may take several weeks (4-6 weeks on average). For the first few days, you will stay at a hospital. You will have a drain in order to remove fluid from the site of your surgery as well as a catheter to urinate. After a few days, you will be allowed to go home. While a reasonable amount of movement is allowed and even encouraged, do not try to make heavy works for the first few weeks after surgery for ovarian cancer.

As for chemotherapy treatment which follows ovarian cancer surgery, it may make you feel weak and exhausted. It is advised to have a healthy diet and exercise within one’s capability. There will be also some long-lasting side effects of chemotherapy.

• Damage to other organs such as bowels, bladder.

As for chemotherapy treatment risks, these are:

To main side effects of ovarian cancer treatment belongs infertility. Additionally, there are side effects of chemotherapy treatment such as nausea, a feeling of tiredness and weakness, problems with the digestive system and loss of appetite. However, these does not appear in every patient with the same intensity.

Ovarian cancer survival rate is quite high as compared to other types of cancer. 46% of patients who underwent ovarian cancer treatment live more than 5 years and these results are growing as the time passes.

Is there a Stage 3 Ovarian Cancer Treatment?

Why Isn’t a Radiation Treatment Used in Treatment for Ovarian Cancer?

After many trials oncologists came to a consensus that radiation treatment is not very effective in treating ovarian cancer. However, it is used in fighting cancer of other types.

What are the Causes of Ovarian Cancer?

It is still not totally established. Family history seems to be of significance, other causes of ovarian cancer remain unknown.

Up to a case

Up to a case