Istanbul is the biggest city in Turkey and In Europe, according to population – it has over 14 million inhabitants. Istanbul is Turkey’s financial, cultural and healthcare hub – it’s the city with the most JCI accredited private hospitals. The city spreads on both sides of the Bosphorus – The strait that divides the Marmara Sea and the Black Sea. Istanbul also connects Europe to Asia forming a very interesting mix, both gastronomically and culturally.

Over 11 million tourists visited Istanbul in 2012, making it the fifth most popular tourist destination in the world. Learn More
From
€70
Get a Free Quote

112 Reviews
Get a Free Quote 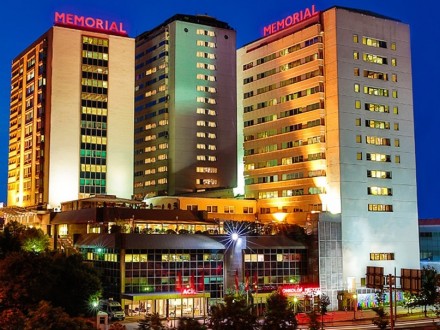 Learn More
From
€55
Get a Free Quote

43 Reviews
Get a Free Quote

Learn More
From
€65
Get a Free Quote

35 Reviews
Get a Free Quote

Learn More
From
€398
Get a Free Quote

The Sultan Ahmed Mosque, also called the Blue Mosque incorporates Islamic architecture and Byzantine Christian elements in its design. It is considered to be the last great mosque of the classical period. The Mosque got its name from the 20,000 Iznik blue ceramic tiles used to line its interiors. The Blue Mosque is also the final resting place of Sultan Ahmed which commissioned the building in 1609, with work finishing in 1616.

The Basilica Cistern is one of the most popular tourist sites in Istanbul. The Cistern is huge, with a total of 336 columns arranged in 12 rows. It was built in order to store water during the Byzantine time – in the 6th century. Most of the columns feature decorative carvings, as they were re-used from other classical-age structures. Some of the most interesting columns on the site are the Medusa stones, in the north-west corner of the Cistern.

Topkapı Palace is one of the finest examples of Islamic art and architecture. The palace itself was built by Mehmet the Conqueror in the 15th century and has been the residence of Ottoman Sultans for over 400 years. The palace is a vast complex of richly decorated courtyards and rooms. The palace features a Harem, the Imperial Treasury room, the Imperial Council Chamber, the Second Court, the Third Court (the Sultan’s private rooms) and the Palace Kitchens. The palace became an UNESCO World Heritage Site in 1985 and has been described as “one of the best examples of palaces of the Ottoman period”.

Tourists can enjoy a wide range of shopping centres and bazaars such as the Grand Bazaar, the Egyptian bazaar and many modern shopping malls all around Istanbul.

● Tourists arriving in Istanbul will be required to purchase a tourist Visa – the procedure can be easily done online or at a visa machine before the immigration section of the airport. The Visa costs around 20 USD.

● There are 3 main airports in Istanbul. Hazerfen Airport is a private airport with limited traffic. Atatürk Airport is located on the European side of Istanbul and Sabiha Gökçen Airport is located on the Asian side of Istanbul. Usually planes land at the Atatürk Airport (IATA:IST) which is just 20 km from the city centre. From there a visitor can take a taxi to Taksim Square for around TRY60. Tourists can also use a local airport service called Havataş which runs express bus services every 30 minutes for around TRY11 to Taksim Square and Aksaray.

● Food and drink at the airport is quite expensive and may cost 4 times more than in the city. It is advisable to bring your own meals from the town if you have a lot of waiting to do at the airport. There is also a supermarket close to the airport metro entrance where you can buy reasonably priced food and drink.

● You can change any sort of currency into the Turkish Lira (TRY) just about anywhere across Istanbul. Most shops and supermarkets also accept credit cards for payment.

● Roaming fees in Turkey are expensive, but you can simply buy a new SIM card when you reach Istanbul and use it for the duration of your stay.

● Istanbul has a humid subtropical climate, so the summer months are generally warm and in winter temperatures differ from place to place.